South Africa is incredibly rich in music, traditional as well as modern, pop, classic and a lot of jazz. So please don’t expect me to offer a comprehensive coverage! What follows is completely based on my taste, with a few extras here and there. Some of the things I skip are incredibly important to people here, for instance gospel music. It fills hours on various tv channels. It’s just not really for me. You won’t find South African hip hop, punk and rock music here either, nor the Boyoyo Boys (perhaps to the dismay of a good friend) and similar music – I’m aware of them, but can’t truly count them as part of my musical experience. However, you’ll find some kwaito, maskanda, jazz and other styles for which the international music market has labels that don’t get more specific than “world”, “international” or “ethnic”. For the varieties of music in South Africa and their history, see this Wikipedia article, or check some blogs such as this one or this one on music in Soweto and Jo’burg. UPDATE: and see my posts on the Bushfire Festival in Swaziland and on the Fête de la musique in Jo’burg. 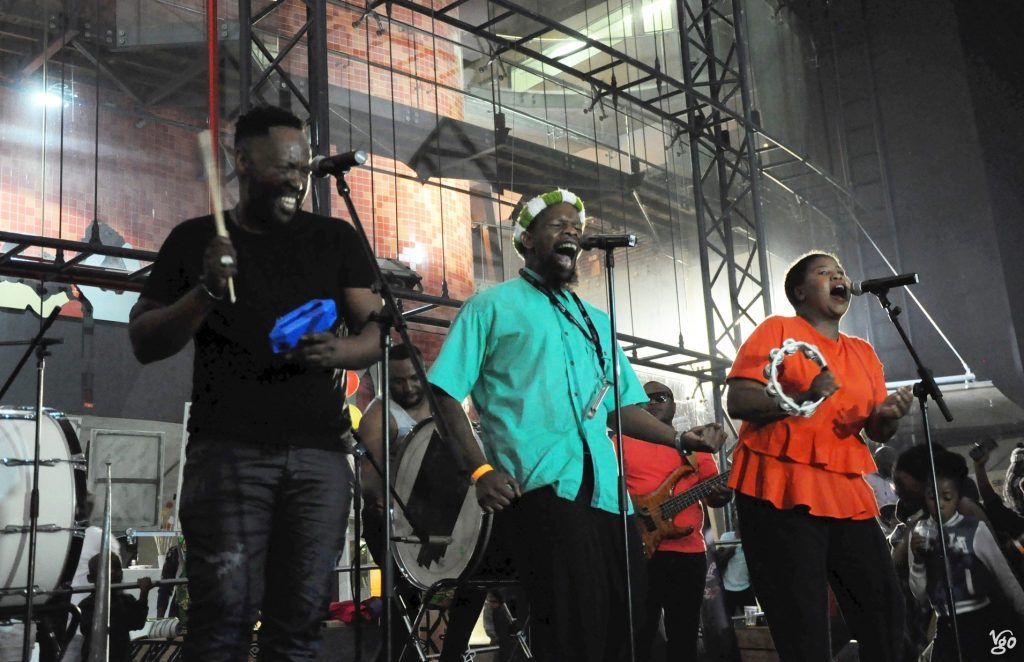 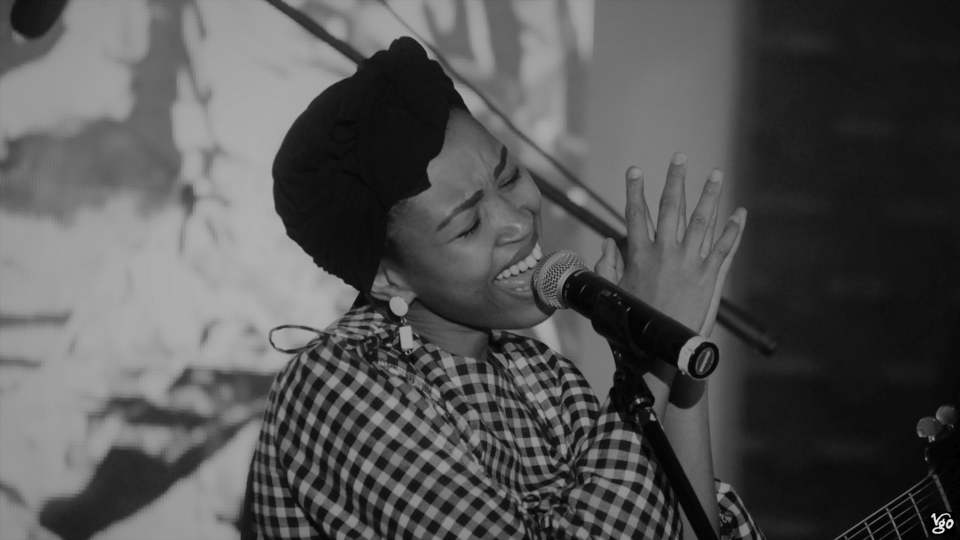 For the fan of music, Jo’burg is a Mekka. You can find music, especially live music, of every kind, and lots of creative people. I was fortunate enough to arrive in time for a major musical event, The Afropunk Festival. For the first time on the continent, this festival of black counter-culture turned my New Year’s Eve weekend into a feast of sounds and colours, and I saw some of my favourite South African musicians live for the first time, notably The Brother Moves On and Thandiswa. Other festivals followed, as well as musical memorials on the passing of Bra Hugh and Mama Winnie Madikizela-Mandela. What a treat! 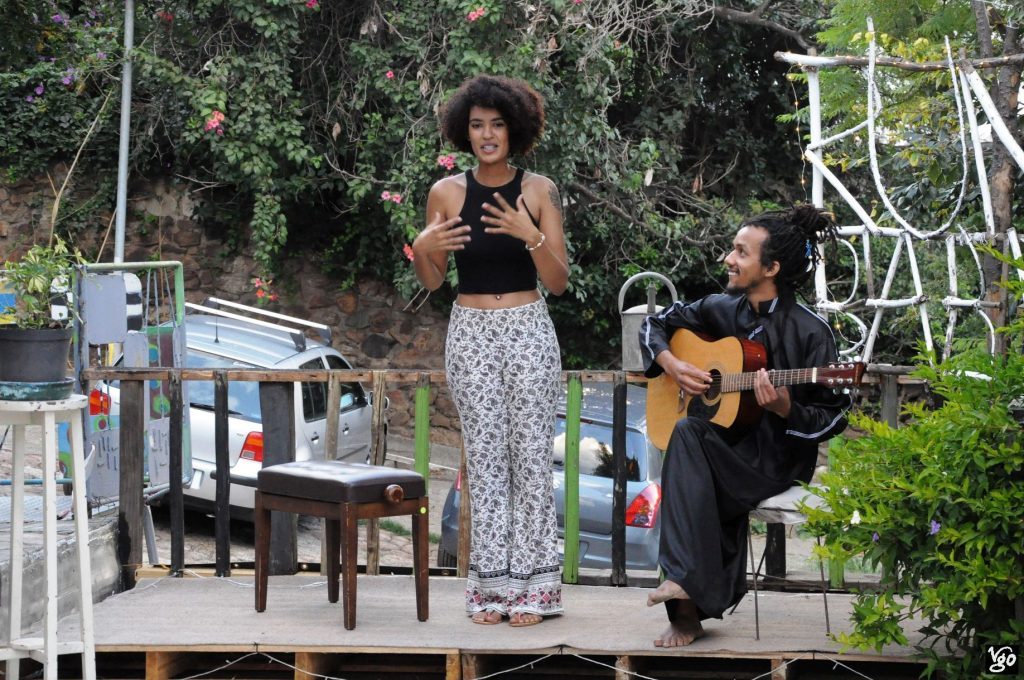 What’s more, I found it easy to join in. Since I love making music with people, I found myself playing together with street musicians in Melville, and beating drums with Johnson and the other guys of Ahenfu Cultural Edutainment in one of my favourite places here, Sky Garden and the Centre for Re-imagines Learning, or in Maboneng. 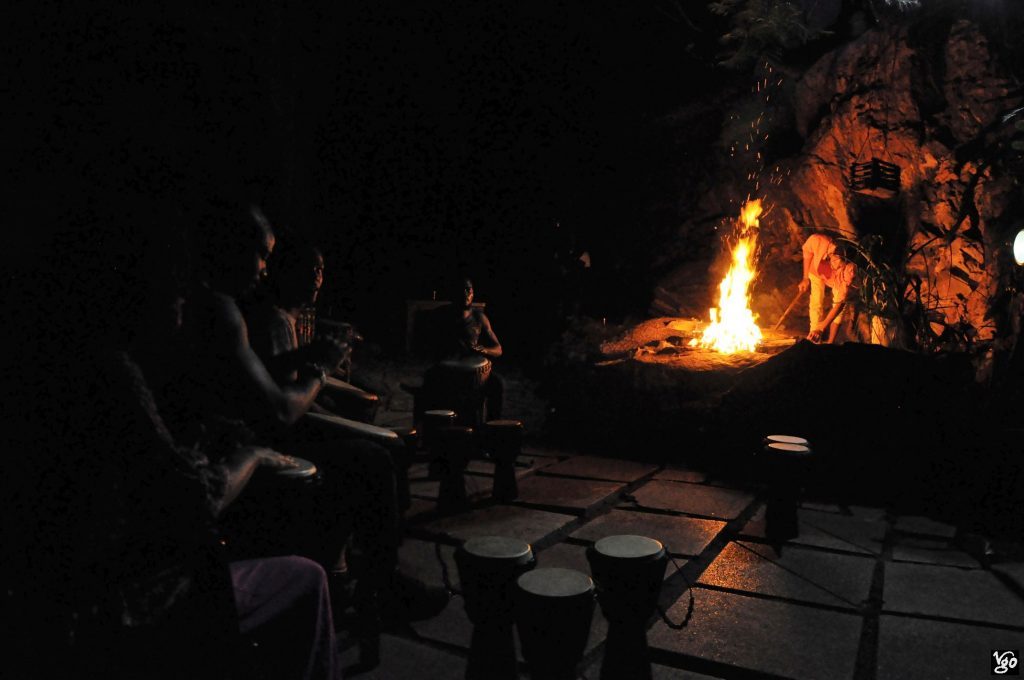 To my surprise, this 11-million strong metropolitan area is also a place where you get to meet famous musicians quite easily – Thandiswa may be walking past you at an event, or you find yourself chatting to two ladies, who later on turn out to be a well-known actress and singer (Masello Motano) and a jazz musician whose music you actually know and like (Siya Makuzeni). I’ve had a beer with Siyabonga, the charismatic singer of The Brother Moves On, at The Orbit (great place for music!), hugged some of the guys of B.C.U.C., and had a quick chat with Mbuso Khoza through my friend Vuyi – you get the picture. 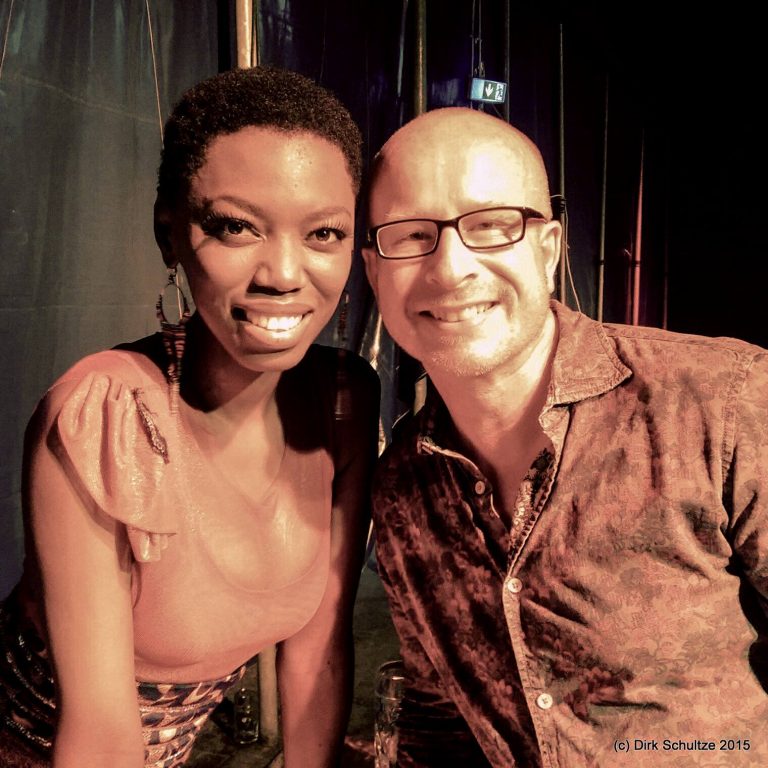 Jo’burg is also the home of producers and big institutions such as SABC or the Academy of Sound Engineering, which attract musicians and film makers who come here to make recordings or for post-production. 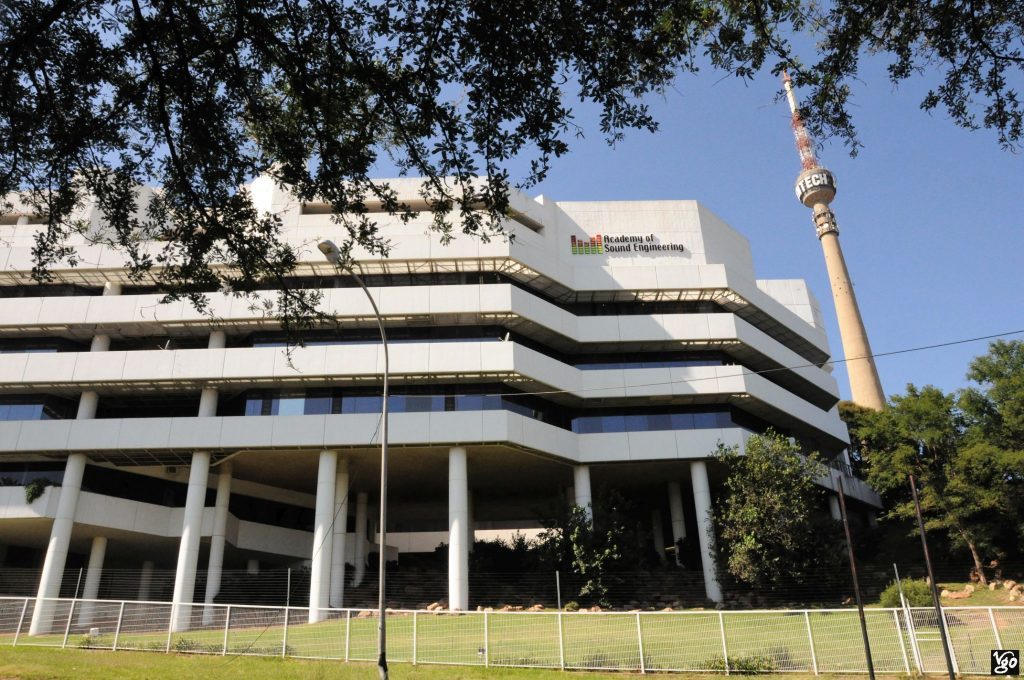 As elsewhere in southern Africa, there are very old musical traditions, documented by surviving musical practices and instruments. It was from here that Hugh Tracey, infatuated by mbira music, started his journeys into the history of traditional African music. This eventually led to the establishment of the International Library of African Music, and a 21-album strong collection of field recordings. 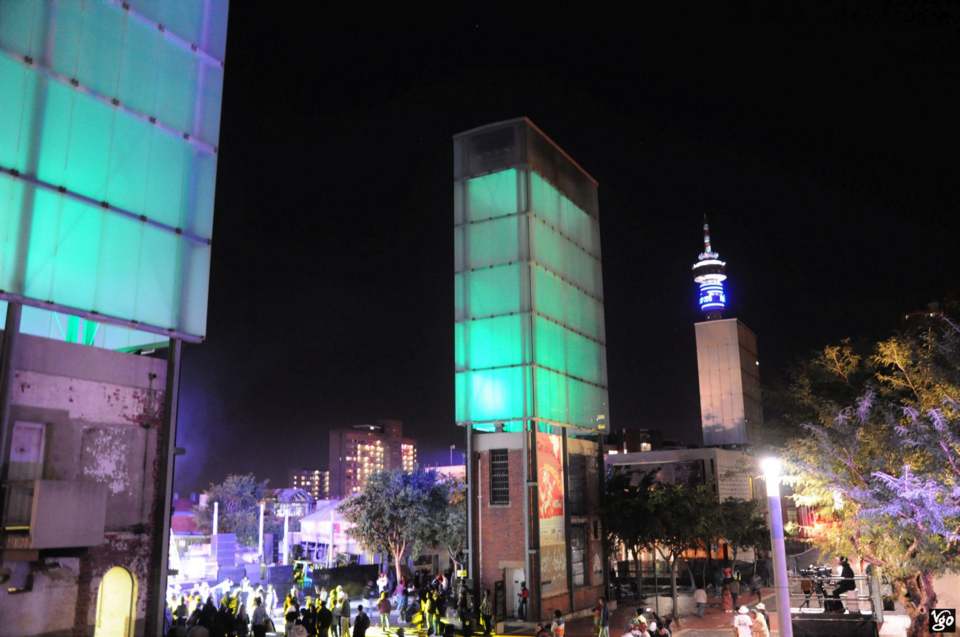 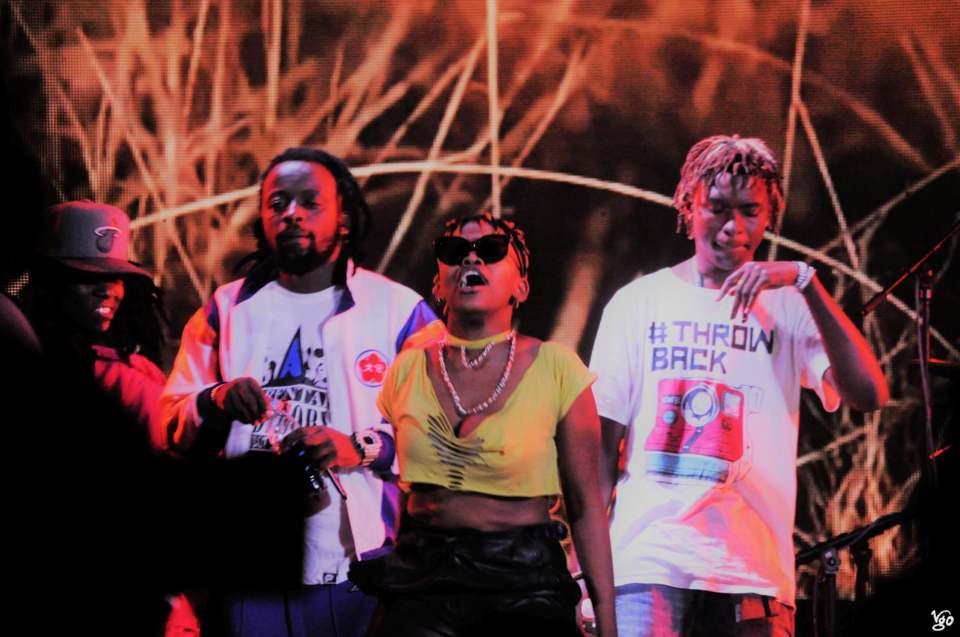 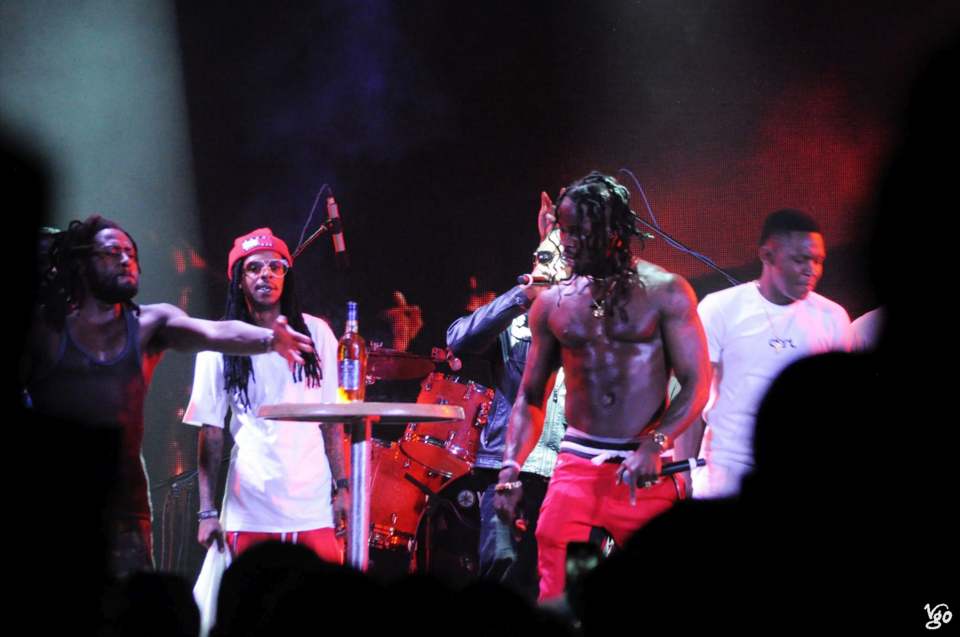 South Africa’s more recent musical history has been affected by the country’s political history, i.e. the rule of the apartheid regime. The international boycott with which the international community punished the regime left the country in isolation. Naturally, this affected musicians who would not be allowed or just wouldn’t perform here, or face quite some conflicts, like Paul Simon for instance (see below). This isolation left traces in the music scene, which, according to Richard Dowden (Africa: Altered States, Ordinary Miracles. New pb edition, 2015, p. 401), did not show close ties with Congolese Rumba or Ghanaian Highlife that shaped music elsewhere in Subsaharan Africa (here’s a good survey of some styles). Local traditions as well as this isolation apparently led to a distinct sound of much of modern popular South African music – I find it much easier to identify a song as being South African in origin than to tell other African music apart with all their Congolese and lately Nigerian influences. 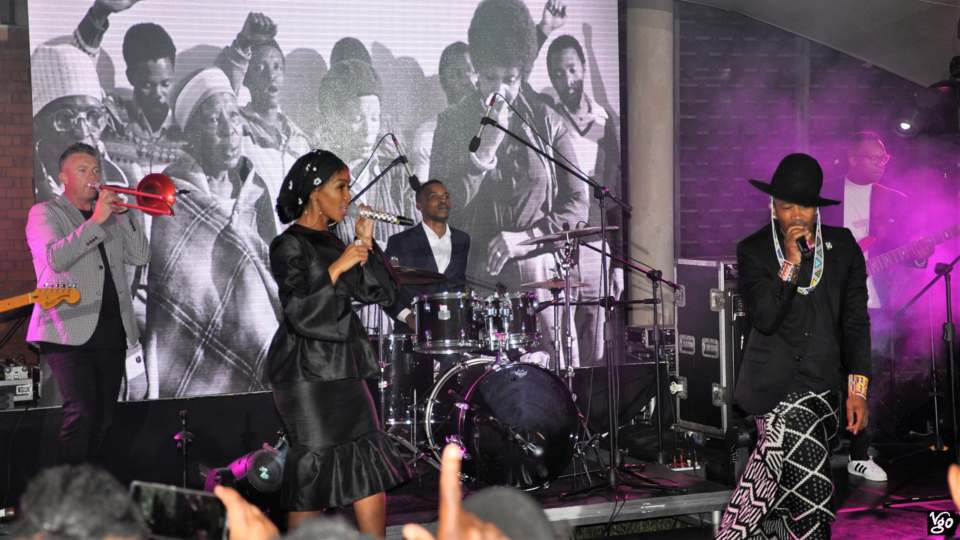 Miriam Makeba is the obvious starting point for a post about music in South Africa – not historically, but through her significance. She is at once South Africa’s greatest musical icon and yet a pan-African representative of the liberation struggle across the continent.

Decades later, forcefully exiled through the apartheid regime, she performs in Harare during the Graceland tour with Paul Simon. Imagine, Zimbabwe in 1987 was a more liberal country than South Africa! Amid fears of a bomb attack by the apartheid regime, Mama Africa enchanted a mixed audience of post-independence Zim. The magic of cheering crowds wherever the tour went was almost matched by the difficulties and controversies about it. Read more here and here.

Bra Hugh is often called the godfather of South African jazz, although I recently witnessed a fierce debate in which a young jazz musician challenged this notion ferociously. Be that as it may, I’m a late-comer to the music of this legend, but admire his music just as much as his cultural legacy at large. When he passed away earlier this year I had the great opportunity to attend one of the musical memorials – see here.  Below are three of my favourite tracks – many more could be added.

My live experience is barely a day old, and I’m still captured by the performance. Traditional Zulu songs, and the dynamics between performers and audience – it was, for me, like a gentle ocean offering itself to dive in. And I did. More, pliiizzzz! 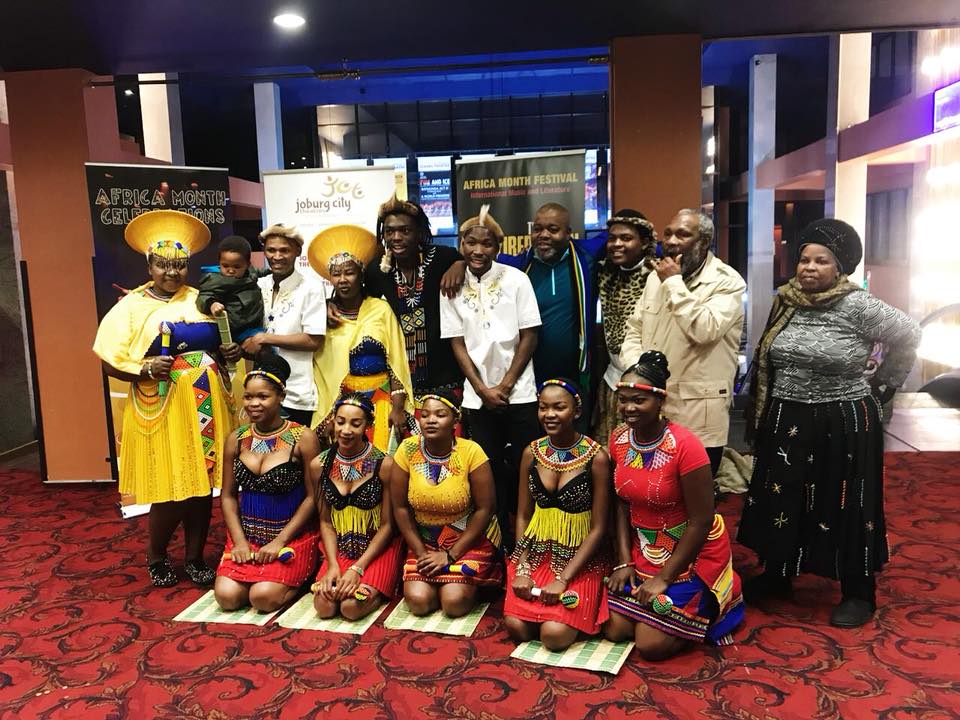 Jazz fusion and Zulu maskanda at its best! I find many of his songs absolutely hypnotic, and I still hope to see him live somewhere.

What has drawn to these two singers is the African spirituality they can (or could) bring onto the stage. Busi Mhlongo passed away before I knew of her, but I was lucky enough to have seen Thandiswa twice since I’m here. Busi’s music is deeply influenced by Zulu folk music (maskandi) and by her spirituality as an initiated sangoma. My headline goes back to the title of her album Urban Zulu. Thandiswa’s music has jazz, soul as well as traditional folk in it, and with her band Bongo Maffin (soon to be reunited?) she was at the forefront of the development of what is perhaps the most popular musical style since the 90s, kwaito.

Lira is one of South Africa’s most successful and internationally renowned singers. She brings you soul music, and is truly impressive on stage. I saw her at the Würzburg Afrikafestival in 2015.

Two compromises for me, both have been mentioned to me so often, I had to include them. I understand that Brenda is incredibly important, the Queen of South African pop, “badass” until she died of an overdose. I may still have to fully discover her for myself, or maybe not. Let’s see.

I think this is a good sequel to Brenda – Yvonne Chaka Chaka‘s song about village beer, umqombothi.

You won’t find terribly many white people who are fluent in isiZulu and Zulu guitar playing, maskandi style. Johnny Clegg is such a (or: that) guy. I’d love to have a beer with him, and a chat. Who knows, it may happen. But he stopped performing, last year I believe. I still owe one of our house helps a jamming session with one of his songs (not on my list here). “Scatterlings of Africa” is high on my list of songs I need to learn how to play properly.

Sixto Rodriguez is not a South African, but unbeknownst to him he was a star here, while he’d fallen in oblivion in the USA. The movie Searching for Sugar Man tells one of the most extraordinary stories of recent music history. I like his music, and without his popularity in South Africa we wouldn’t know him. Hence he’s here.

Back to this present decade, and to one of my absolute favourite bands: Bantu Continua Uhuru Consciousness, short B.C.U.C., from Soweto. The six guys and one lady confine themselves to percussion, a bass guitar and vocals – and deliver an energetic performance on stage, it almost blew me away when I saw them live amidst a local Soweto crowd. Seeing them locally is a true perk, because band and audience speak the same language, isiCamtho, the language of the township.

The Brother Moves On

A couple of years ago I first heard music by TBMO, and Siyabonga Mthembu’s vocals caught me immediately. I found some of their songs a bit too long and uneventful, but the attraction had been kindled. Since I saw them live at The Orbit I’m a dedicated fan. Go see them live if you can – it’s absolutely worth it. Accomplished musicians, and a front man who does not shy away from controversy, has a good sense of humour as well as depth, in short: is special in the best possible sense. I also saw Siyabonga live with a brand new project, Manjik – just as great. Go see them too!

Urban folk (Didn’t I coin this term once? Well, must have resided in my soul for centuries), or just great music, also live. Go go go!

Gugulethu Khumalo alias “Berita” is a beautiful young singer whose siNdebele roots are in Bulawayo, Zimbabwe, a home she left with her family in one of the darkest years of Zimbabwean history. Collaborations with Oliver Mtukudzi and the late Hugh Masekela make it clear that despite her young age, she wasn’t a newcomer anymore even some five years ago.

What a voice, what a personality, with purpose and a message. I was privileged to see her present a new album, Platinum B Heart, in the making. She was joined at The Orbit by fabulous musicians and the amazing Mandi Poefficient Vundla. The venue was packed, still the people around me made room for more guests to join in, swapped chairs if they felt someone should be sitting in their stead now (the pregnant woman next to me, for instance, more than once offered me or someone else her seat), and the cheers, shouts in-between and the occasional dancing made it an unforgettable night out in a town I find harder and harder to leave.

Very danceable. I saw them live in Lusaka in 2015, and was surprised, like all the audience, about the singer’s moves. Impressive, bro!

… South Africa’s most prominent DJ. He majored in jazz, was a background singer for Madala Kunene, and and and. Cool, dude!

Big names in the African music scene, and collaborators in some projects. Again, I have been lucky to see them live, at Lake of Stars in Malawi in 2014 (Mafikizolo) and 2015 (Uhuru). Whenever I get a chance to dj, Mafikizolo’s “Khona” will be part of the set. See Uhuru’s live version from Lake of Stars below – it was hot hot hot!

I met both at Sky Garden, and oh! we had intense discussions. My shoes still carry traces of red wine flowing from Siya’s glass 😉 . I love the creativity and the passion – see for yourselves! It was great meeting you without knowing who you were (though I knew Siya’s “Madam Bliss”) – anyway I know we’ll meet again soon. See you!

Really? Yes. South Africa’s national anthem, yet another token of the country’s complex history, has been praised for its musical quality. So why not conclude with it? Here you go, and read up on it here.