As I am expan 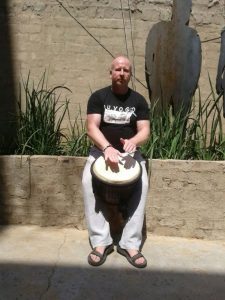 ding my radius in Jo’burg, I went to Maboneng Sunday market (a.k.a. Market on Main) in the company of my flat mate Tuğçe. What a lovely place with nice stuff to buy (I did, a shirt), and plenty of food stands. My main objective though was drumming. My friend Vuyi had told me there would be drummers there, and so I was excited to see for myself, and perhaps to join in. After all I had just bought myself a drum here, though thought wise to leave it at home for this first visit. When our taxi passed by a group of drummers on lively Fox Street I told him to stop. We’d arrived – obviously! I did enjoy the drumming going on there, and later hijacked a drum and played some myself (see below). 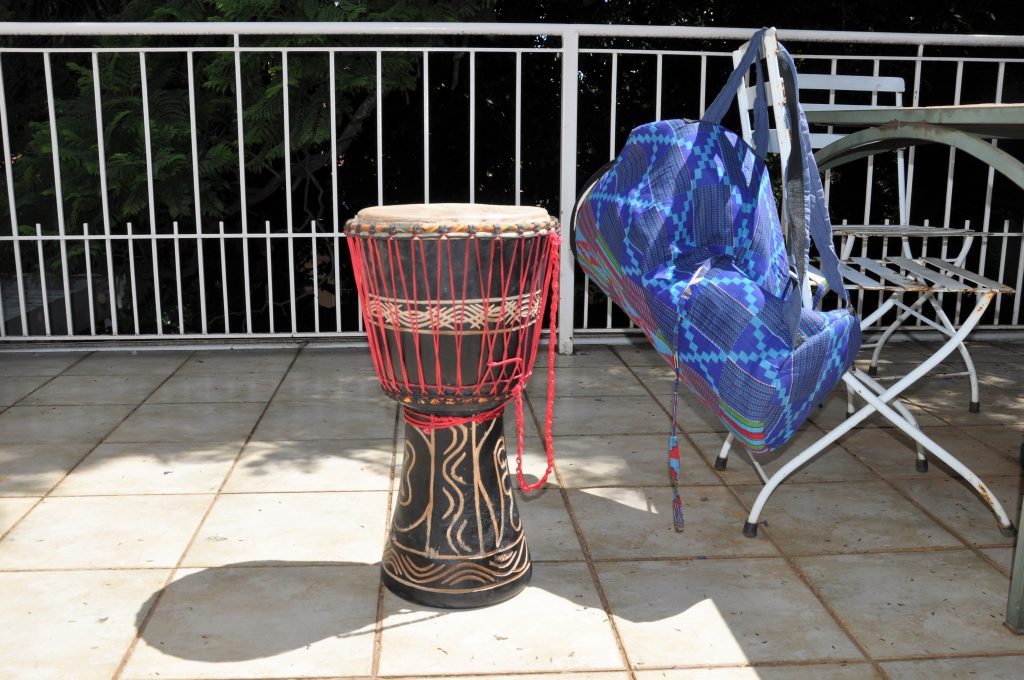 My new drum – made in Ghana 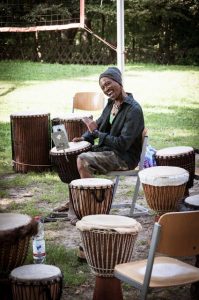 Drumming, especially West-African drumming, is one of the best things I started some three years ago. It has helped me establish good friendships in my new town, Göttingen – Ibs, my Gambian drum teacher, Darrin, Martina, Kathrin, Corinna, Henrike, Seydou, … And it was one of the things that brought me in contact with Hülya, ex-partner and still good friend. We both became some sort of an institution for the entertainment on our Gestalt-therapy training weekends. No surpise then, perhaps, that my farewell card with greetings and wishes from all of my Gestalt people came in the shape of a djembe, and the fact that this summer, Hülya and I played together again for our Gestalt people for the first time since our break-up meant the world to me. 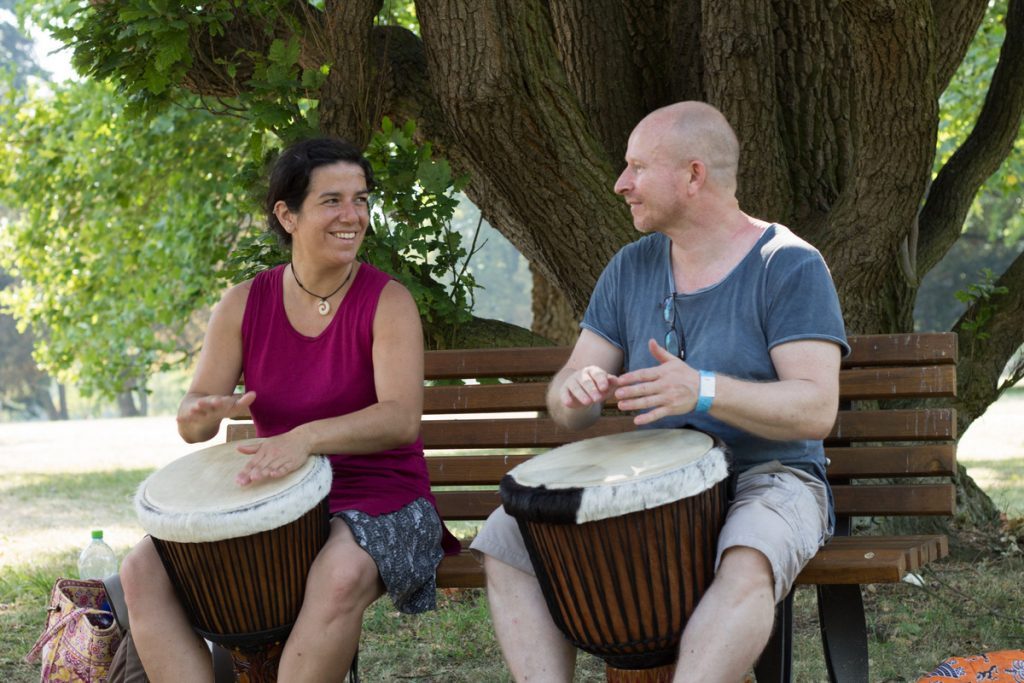 But there’s a lot to be said for drumming as such. Let me start with what I understand the least of: Neurologically speaking (like other forms of making music) it helps to keep your brain alive, enhances creativity and the ability to learn, especially languages. Specifically, it seems to help connecting the two hemispheres, left and right brain, and there’s a lot to be gained from that connection – you know the odd pair, reason and emotions, just sayin’. Tap the following pattern on a table or any other suitable surface, with R= right hand, L = left. Try to be regular and once it works, speed up.

How do your left and right sides cooperate? You see …

Psychologically speaking, playing drums in a group requires two socially and psychologically very important abilities: to be in tune with others, i.e. to follow/blend in/cooperate, and, when required, to do your own thang (like playing a variant pattern or soloing on a drum) All that at sometimes high speeds with a high degree of precision! In fact, I’ve come to refer to drumming as African precision work. You don’t get to hear that phrase a lot, a shame really. Joining a drumming group thus may enhance your self-confidence within a social network – try it out! Blend in and stand out where appropriate or required.

Philosophically speaking (and please allow me somewhat to over-generalize the term “African” here), drumming for me is African philosophy in performance, i.e. the equivalent of Heraclit’s panta rhei, everything flows. Regardless of how divers drumming on the continent can be, starting from drum designs to playing styles, occasions and dances, drumming always also contains an element of ubuntu in it as it unites people from regions and nations across the continent. And ask a foreigner about African music (again, this is actually a field of much diversity!), they are likely to emphasise the prominence of beat in much of African music. Let me call it musical ubuntu, or as Max Roach illustrates it beautifully in “All Africa”:

The beat has a rich and magnificent history,
Full of adventure, excitement, and mystery.
Some of it bitter, and some of it sweet,
But all of it part of the beat, the beat, the beat.
They say it began with a chant and a hum,
And a black hand laid on a native drum.
Bantu, Zulu, Watusi, Ashanti, Herero, Grebo, Ibo, Masuto, Nyasa, Ndumbo, Umunda, Bobo, Kongo, Hobo, Kikuyu, Bahutu, Mossi, Kisii (Kissi/Kisi), Mbangi, Jahomi, Fongo, Bandjoun, Bassa, Yoruba, Gola, Ila, Mandingo, Mangbetu, Yosee, Bali, Angoli, Biombii, Mbole, Malinke, Mende, Masai (Maasai), Masai, Masai
[transcription stolen from here]

Everything flows, everything is rhythm. The world is in constant change, on the move, and movement, of course, is rhythm. There is no movement without rhythm, as the title of a beautiful video puts it. Short ones, like tap tap tap. Irregular ones. Longer ones, even very long cycles, like the return of summer or winter or rainy season, or granny being “re-born” in a granddaughter. The challenge of constant change, though, is massive, and as humans we tend to escape into identity fictions, where identity, literally ‘sameness’, provides us with an illusion of stability. German, male, academic – some of the illusions that shape my interactions with others, quickly emerge in the field between Me and others and contain what could otherwise be a meeting of I and Thou. Sameness over time, what a silly idea, and yet so powerful and, apparently, needed. And yet, everything changes all the time, and like the god of Genesis, though a bit more panicky perhaps, we call into existence an appropriate container for it, called time.

The flux of time, the river you cannot step into twice, the flow, and we are well-advised to go with the flow. Where necessary the flow will build up to become a surge washing away obstacles in its way. Drumming is a beautiful semblance of that, the flux of time or pulse of life. Because everything is rhythm.

You may not be surprised to learn that there is a connection to Gestalt therapy. One of the basic principles is nicely captured in the slogan “Don’t push the river, it flows by itself”, which is the title Barry Stevens gave her exploration of Gestalt therapy in the wake of a summer spent at Fritz Perls‘s institute in Canada. Well, I’m in Johannesburg – the cradle of Gestalt therapy since the Perls lived here as Jewish refugees from Nazi Germany from 1933 until 1946. It was during thist time that Fritz Perls broke with Freud and wrote Ego, Hunger, and Aggression (publ. in Durban, 1942) and Laura Perls was very active as a therapist. I may be able to visit their three houses here, though the flux of time has washed over them and placed two in now rather problematic quarters of the town. We shall see. 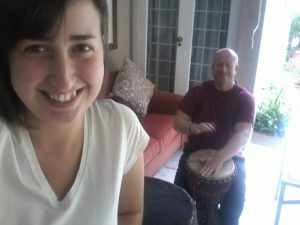 There were quite some interesting drummers in Maboneng, but at long last I needed to hijack a drum myself and played. Thanks Tuğçe for the footage, and for becoming my drumming student ;-).

It was exciting to play here and to hear the appreciation of some of the local folk. And I made some contacts, let’s see.