A word of warning: I will write about something here that I know very little about. Something that a lot of people consider beyond rational understanding, and that others consider plain nonsense. Something those with a strong (and narrow-minded) Christian attitude wrongly (!) consider witchcraft, and that I have not yet been granted the chance to experience first hand. I tried, but due to an illness my meeting with Noksangoma had to be cancelled, and another appointment was impossible to make. It wasn’t time yet, perhaps, to see it in a light more akin to the topic under discussion. However, I feel like I have to write about the sangomas, the traditional diviners and healers in southern and notably in South Africa. Not only because they play an important role in the culture, even in the 21st century, also because they can bridge the potentially wide gap between ancient beliefs and practices on one side, and modernity on the other, and also because some engage in political matters. I also feel I must write about them because I am personally intrigued by what I’ve seen and heard, not least because I have noticed similarities to what I learn in my training in gestalt therapy. 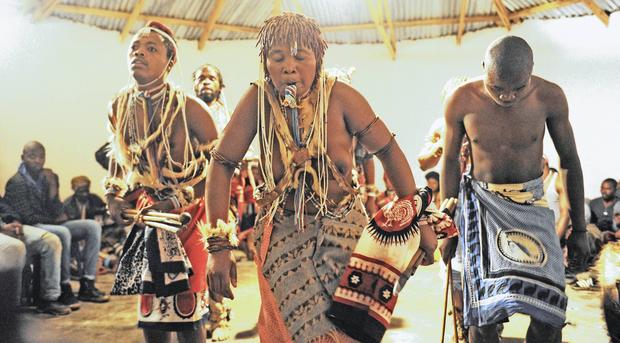 Like elsewhere in the world, people in southern Africa developed ideas and practices about well-being and about how to heal those who suffer from something. While so-called “western” medicine trusts in largely material procedures, and focuses on the physiology of human existence, non-western traditions are more holistic and take into account that life is more than chemistry and physics. Western, rather technical medical procedures declare physiological processes to be the cause of an illness, whereas traditional medicine often sees them as an effect of other processes, not necessarily chemical or physical ones. I have good examples from personal experience of how a persons life experiences, or even those of previous generations, have made a person sick. Western medicine is catching up, slowly, and we are now talking of epigenetic phenomena or transgenerational traumas. This is where, I believe, we may connect with traditional African, or to b specific: Bantu belief systems. Traditionally, members of Bantu tribes would accept the existence of a creator god, yet spiritual practices would largely focus on the amadlozi or abangoma – the ancestors of a family, a clan. According to this belief, the deceased keep on influencing people’s lives, and interact with them. It is especially vital to resolve issues that may persist with an ancestor, what in gestalt therapy would be called unfinished business.

The ancestors are omnipresent, and some people(s) may be inclined to use plural forms only even though they talk about an activity done by them as a single person: you never walk alone, as it were, because your ancestors are always part of your choices and actions. This kind of thinking becomes tangible also with some musical instruments, where noise-generating devices are added (bottle tops on mbiras for instance), whose noise represents the ubiquitous background humming of the tateguru, as the ancestors are called in Shona culture, where the mbira belongs (read more on mbira in post on Chiwoniso).

Music, notably drumming and singing, play an important role, as do dreams, divinitory practices such as the throwing and reading of bones, and the knowledge of herbs.

Quite a number of musicians are in fact a sangoma, notably Thandiswa Mazwai.

While technically a sangoma is a diviner or spiritual healer (the psychotherapist, so to say), the herbalist is called inyanga (in isiZulu and some other languages in South Africa, and differently elsewhere). Here is a beautiful word field based on the word used for the ‘drum’ (and if you know me you know that matters!):

To this day, more than 50% of the people in South Africa seek the advice of a sangoma before they’d consult a medical doctor. Not necessarily because it is cheaper, which it may not be, but because of a belief in the spiritual cause (including witchcraft) of diseases. Likewise, there are a lot more izangoma than medical doctors in South Africa and probably elsewhere in the region, unfortunately quite a number of quacks amongst them. While the training to become a sangoma is hard, and does not exactly follow uniformly regulated principles. Besides, it is highly individualistic, first and foremost of all since it needs to be based on a calling (which, it appears, even white people can have). I was lucky enough to get to know a person who had the dreams that make up the calling, and she was (and is) scared to follow through on a path that is unavoidable. You cannot refuse your calling for long without suffering, is the idea. On the other hand, the initiation process to become a sangoma is hard, tricky and also dangerous. The fact that part of the initiation is done in and under water scares a lot of those who have ubungoma, not least because there are casualties, i.e. deaths that can occur in the process. Or so western thinking would put it, not necessarily, however, traditional belief systems. According to them, some people stay in/under water for months or years before they return. So the grandmother of my acquaintance. She would sometimes disappear, then reappear months later.

Some of this spirit is present in this beautiful short movie. It is not about sangoma practices as such, but about the role of the ancestors and death as a liminal space. A must-watch, I find.

I have collected more links here, and before I elaborate on this topic at a later date, you may follow the links and clips below to dive into this fascinating realm. those of you familiar with gestalt therapy, family constellations or similar practices may discover similarities of one form or another.

Cultures of ‘magic’ and healing

Homecoming for a new sangoma

Ancestral Spirits – Called by the ancestors

on the Superficiality of the Self

I would like to recommend the next two clips in particular:

A soap opera in which the ancestors play an important role in the context of 21st-century Durban: