From Mbale, where I was delayed because of my leg injury, I drove towards Jinja to meet my Göttingen colleague Katharina and her family. Some 10 km before I reached their place, and just as I was overtaking a truck, my car broke down. I barely managed to drive it onto the curb, with traffic coming up from in front, and a mad driver close up behind me. I was lucky, nothing happened. Except that I was stuck, had no clue where I was, and it was an hour or so before nightfall. Yes, I was quite worried. The prospect of being stationary in the dark, or even to leave the car behind with all my stuff in it to find somewhere to stay, was not exactly encouraging. I had to do something, stupidly, my phone still did not connect to local networks. The last sign I remembered seeing on the dashboard was the oil warning, so I tried to top up with oil I bought from a fuel station that I could see in the distance. That wasn’t it, so I hailed down two boda-boda drivers, and they fetched a mechanic. 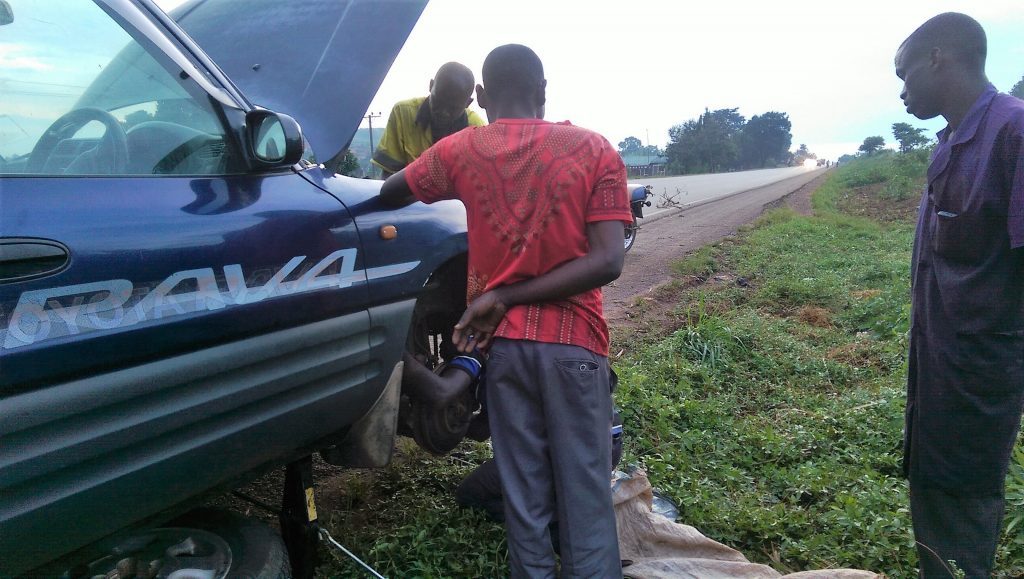 fixing the car by the side of the road

An hour and a half later, it was dark and it also had started raining, but I could drive again. As a side effect, for some blessed reason my phone finally decided to lock onto UG network and I could make phone calls and text people (they eventually cost me € 120,- – which is ridiculous considering that changing the alternator belts and the timing belt, all in all two repairs, combined cost me around € 60,-). Katharina waited for me by the side of the road, like a bright pillar amidst the locals, and she guided me to her in-laws’ place. Eventually we went to their house, and I spent the night under a makeshift moskito net. Meeting Martin, her husband, and his parents was lovely, and especially the kids, Jakob and Lisa, enjoyed my presence. 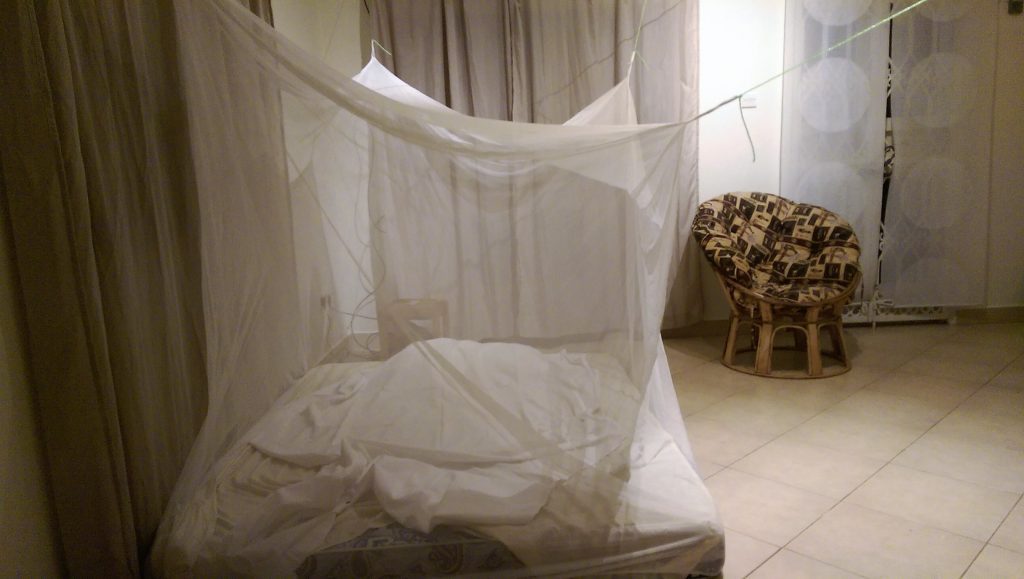 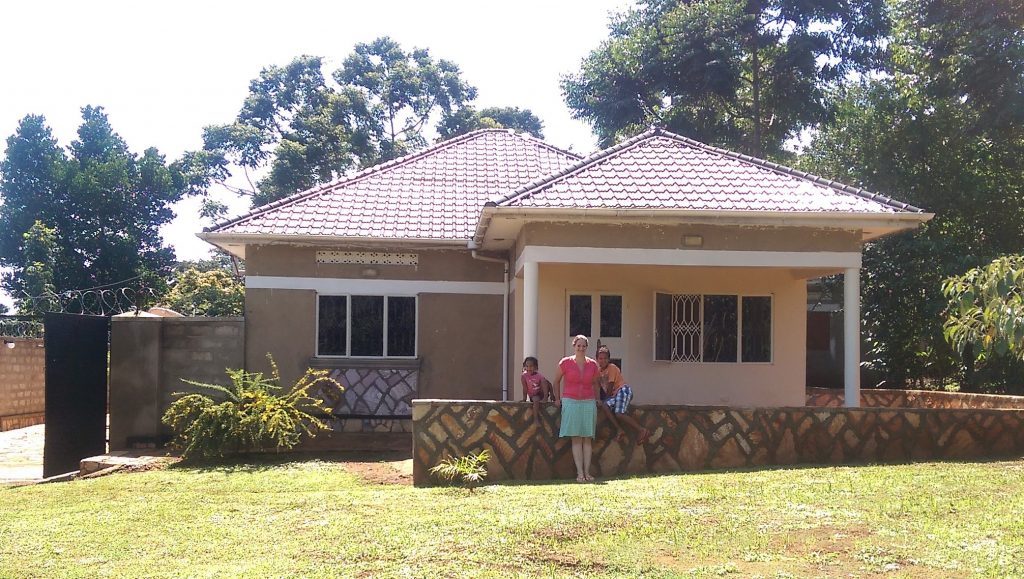 Katharina and the kids outside their house near Jinja

Because my car needed a further repair, I skipped visiting the source of the Nile and drove back to Kampala. It took me hours to get through the nightmare that is Kampala rush-hour traffic, and Suzan and Simon greeted me with some relief when I turned up after a ridiculous 5-hour drive from Jinja. The guy who had to pick up the car was there as well, and since he didn’t know about the second repair, he didn’t have enough money to reimburse me, so we agreed to fix that the next day. I was surprised: before I could make up my mind how to go about this, the car rental called me, asking when they could send someone with the remaining money. Excellent! That’s what I call service. 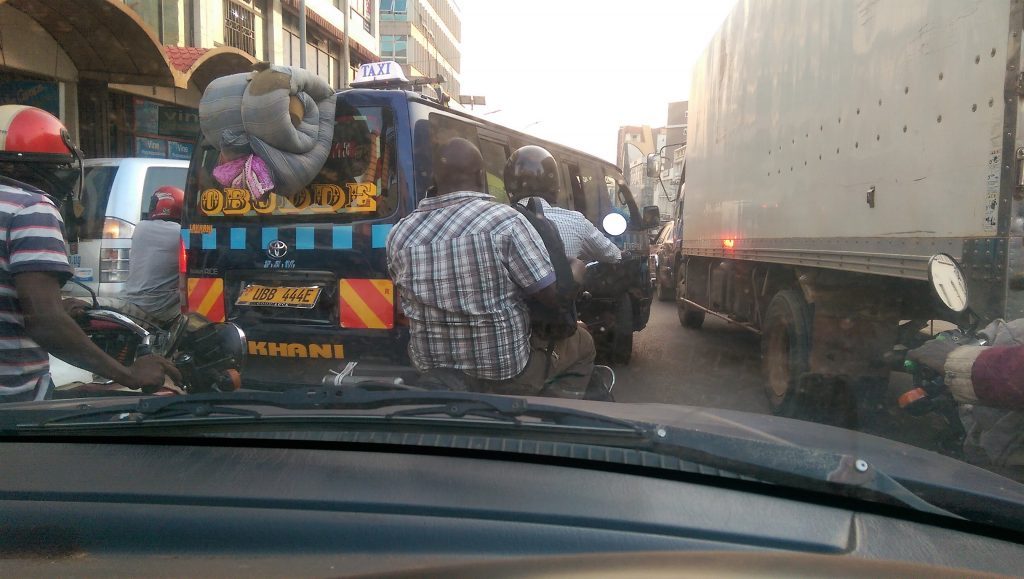 Despite this, I knew I needed a new car, and I almost immediately found another Rav4, in perfect shape with only 29,000 km on the meter. I stayed another day with Suzan and Simon, then left for West Uganda, to Fort Portal. What a lovely drive – the lush green of the countryside, and a very good road with almost no potholes. I enjoyed it thoroughly.

The window and balcony of my room in Fort Portal (Relief Motel) gave to the Rwenzori mountain range, and it was a wonderful late afternoon, visually, with the sun about to set behind the high mountains. Acoustically I felt increasingly terrorized by the noise from a nearby church tent, whose pastor in a voice that may well have been Satan’s brainwashed, or so I thought, his disciples for some 6 hours. The only stopped at half past midnight. I asked the reception to call the police, but they wouldn’t.

Anyway, I was in one of the loveliest landscapes I’ve ever been, scattered with volcanic craters (and a mild earthquake on my first night was noticeable evidence of volcanic activities in the region). 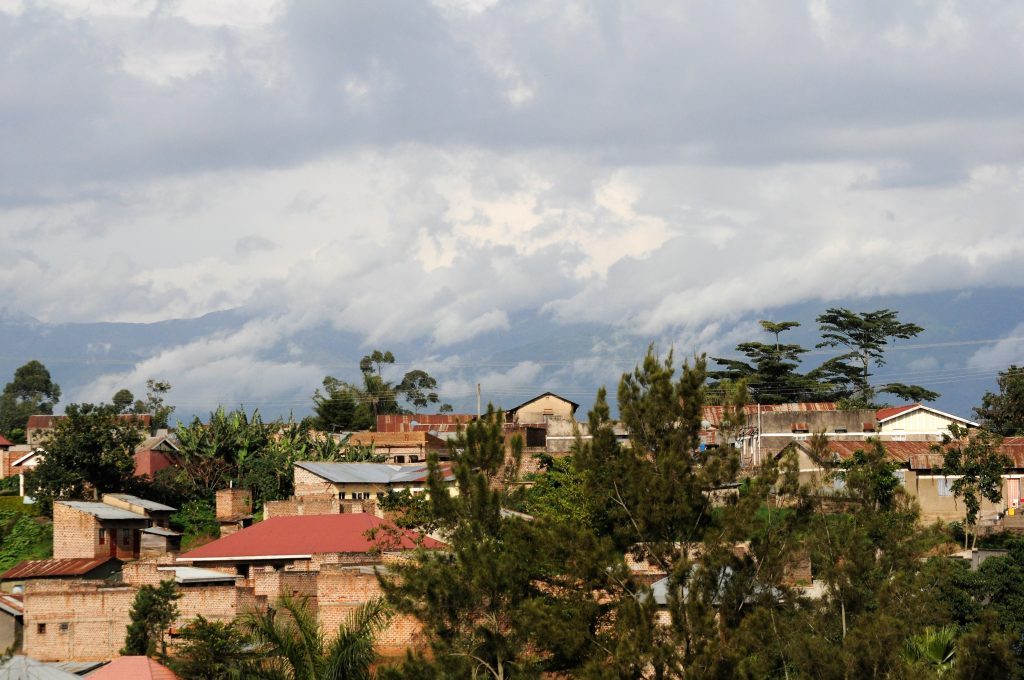 Fort Portal, view of the Rwenzoris 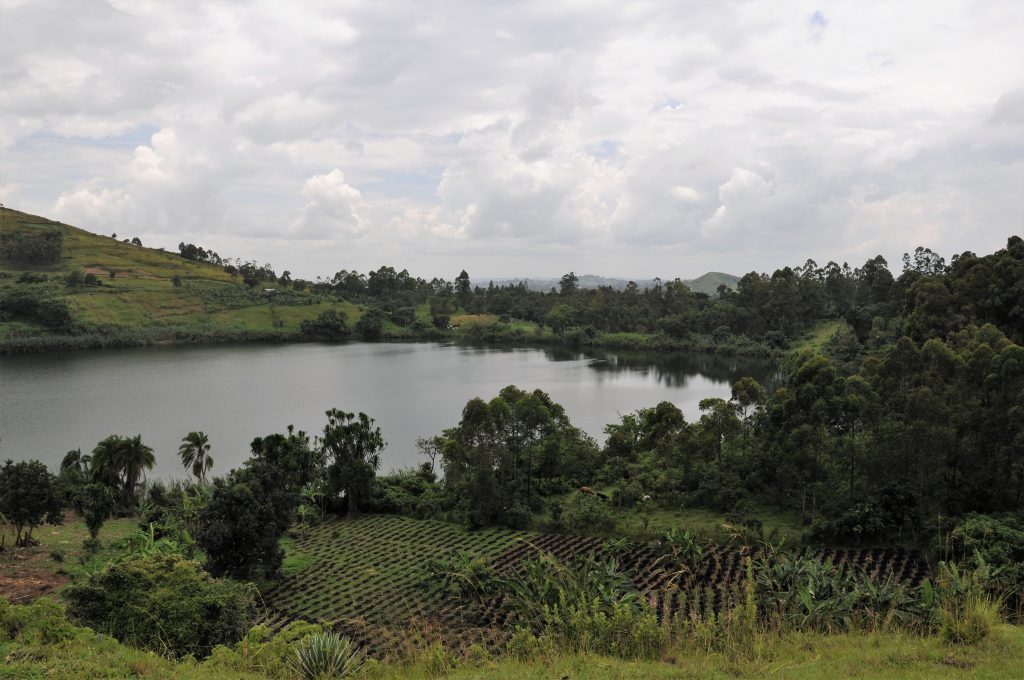 As I always do, I asked my guide for local folklore. He said as kids they were told to beware of a three-legged woman who would pull you down under water. These crater lakes are very deep, and nearly free of life, fish-farming proved impossible even. So the connection with death is evident, I guess. 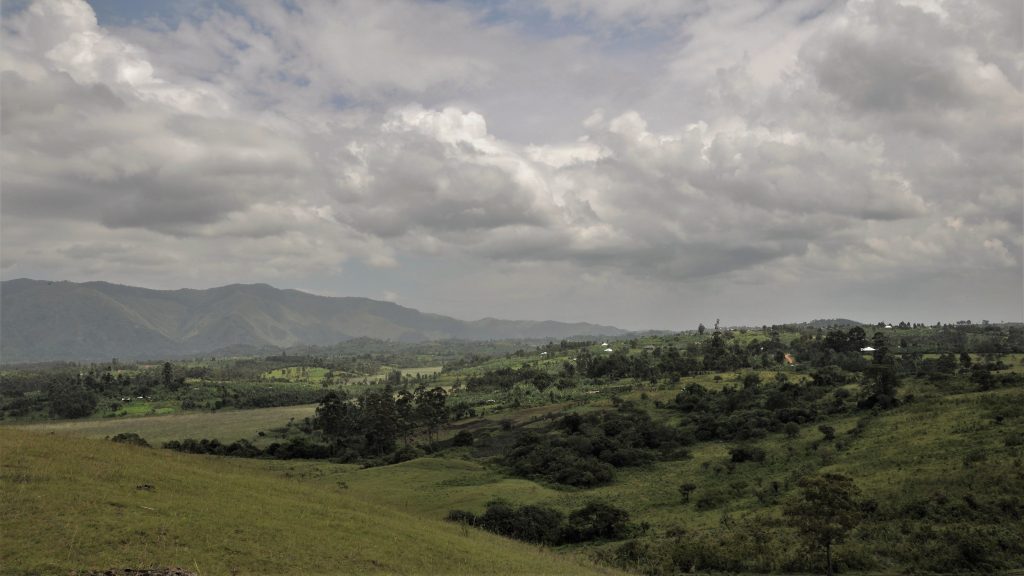 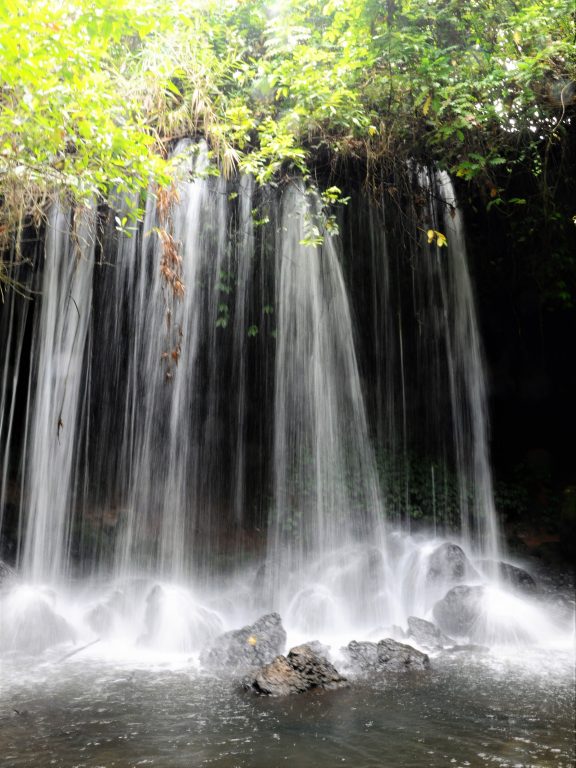 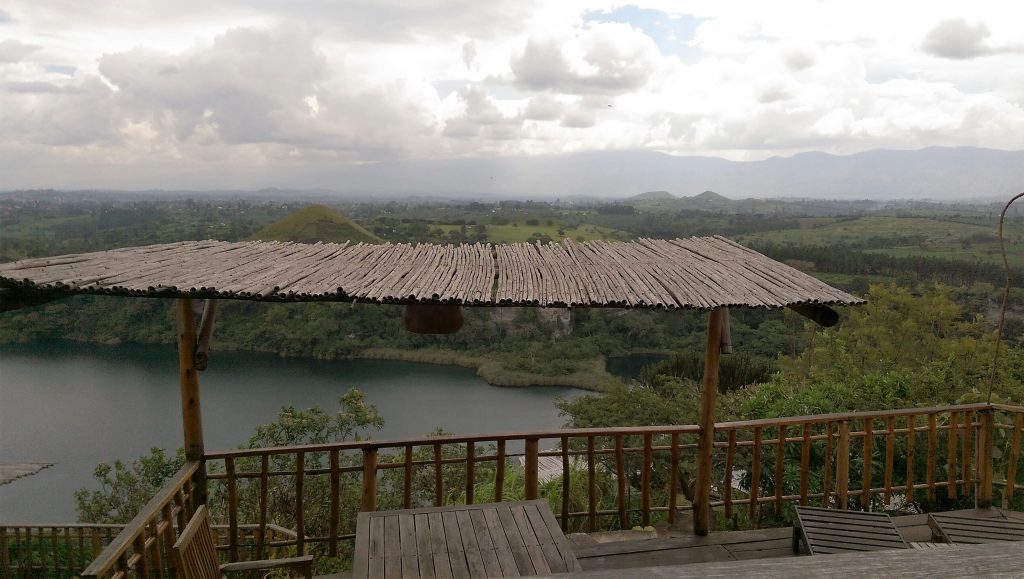 On one morning, an African business complained to the waitress about the size of his coffee mug: “Bring me the one you’d give to your husband. This here is for English people!”

The waitress, Fely, is a single mom. The father of her daughter (now 6) left, as so many African men do, when she was pregnant. Fely starts work at 6:30 am and finishes around 11 pm. That’s over 16 hours a day. True, the work is mostly easy and doesn’t need much qualification, but then again – it leaves no room for anything else. On top of it, she works 7 days a week, with one day off every 2 or 3 months. And besides free accomodation at the motel, this earns her € 25,- a month, of which she spends half for school fees. Taking the bus in order to visit her daughter, who lives with the grandparents ca. an hour away, is quite an investment. I was shocked when I learnt this, and on a suitable occasion gave her what is a month’s wage as a tip. I later also learnt that this kind of income is fairly standard across the region (from East UG into Rwanda at least). 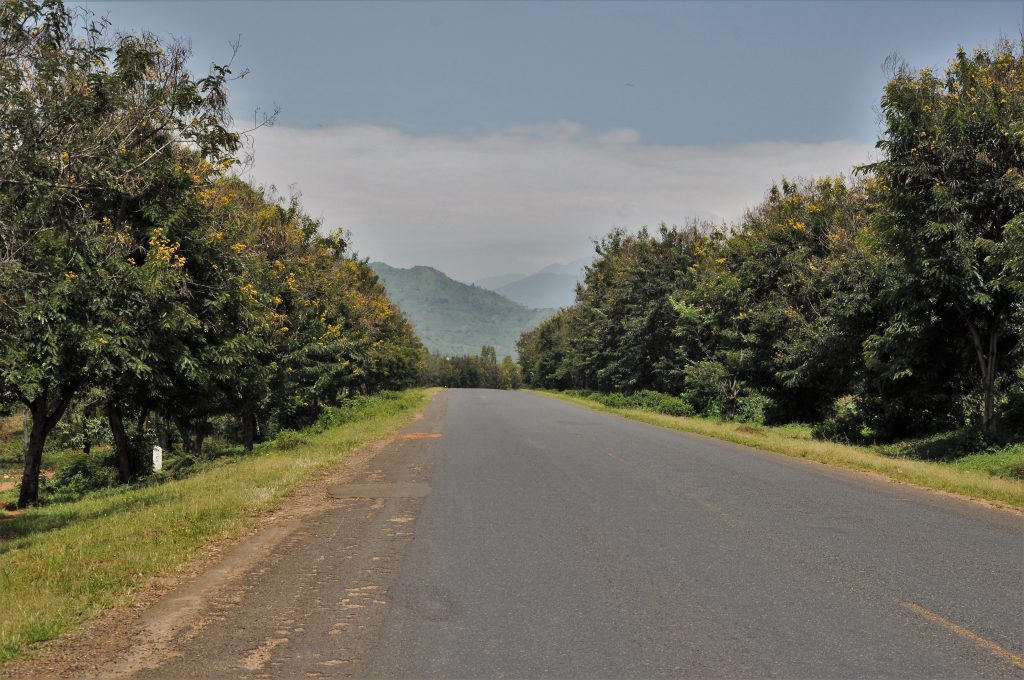 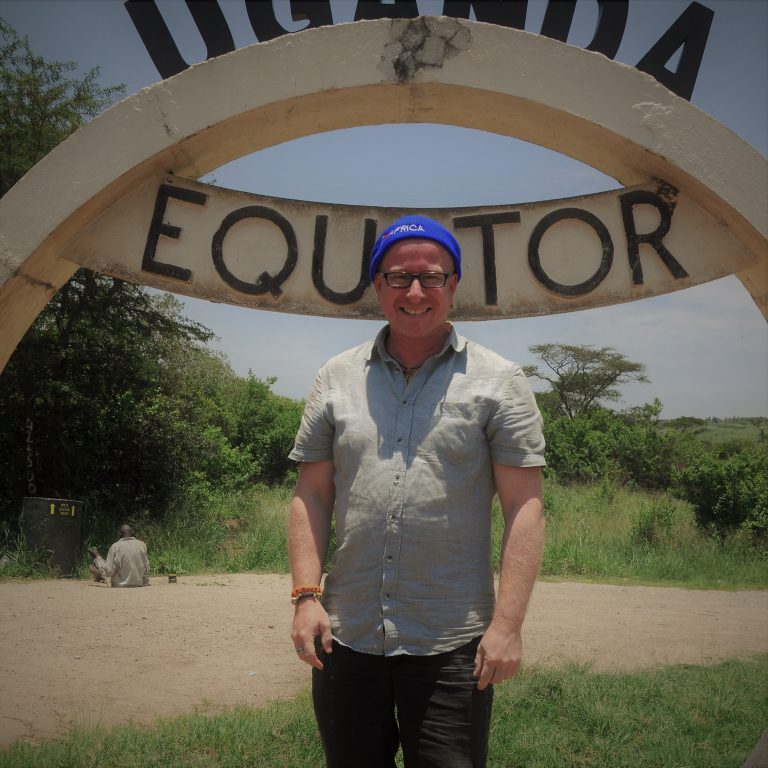 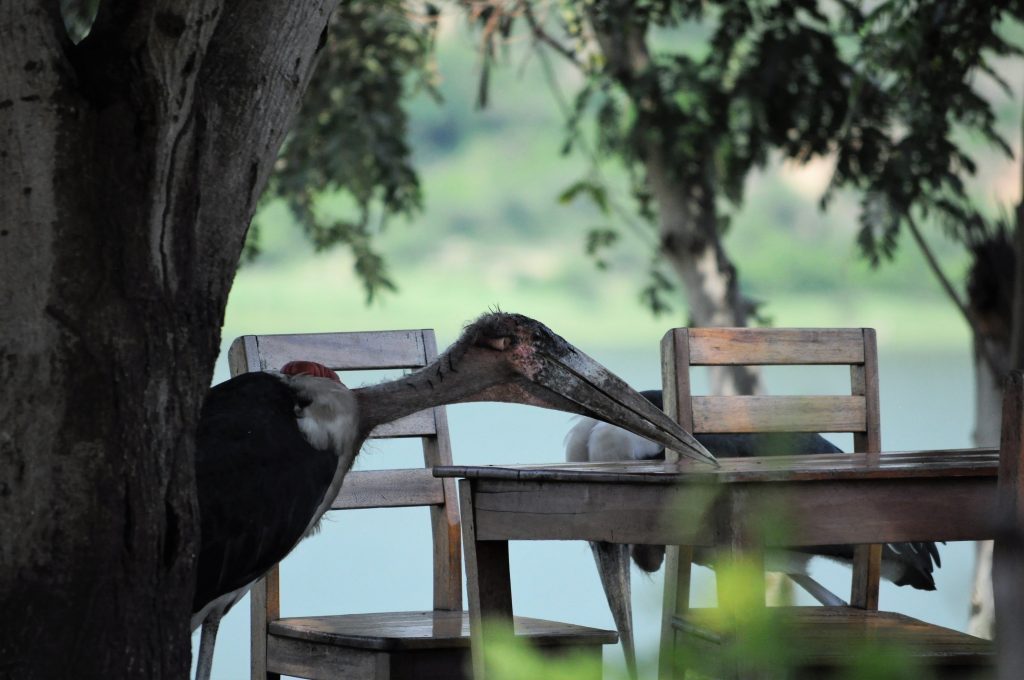 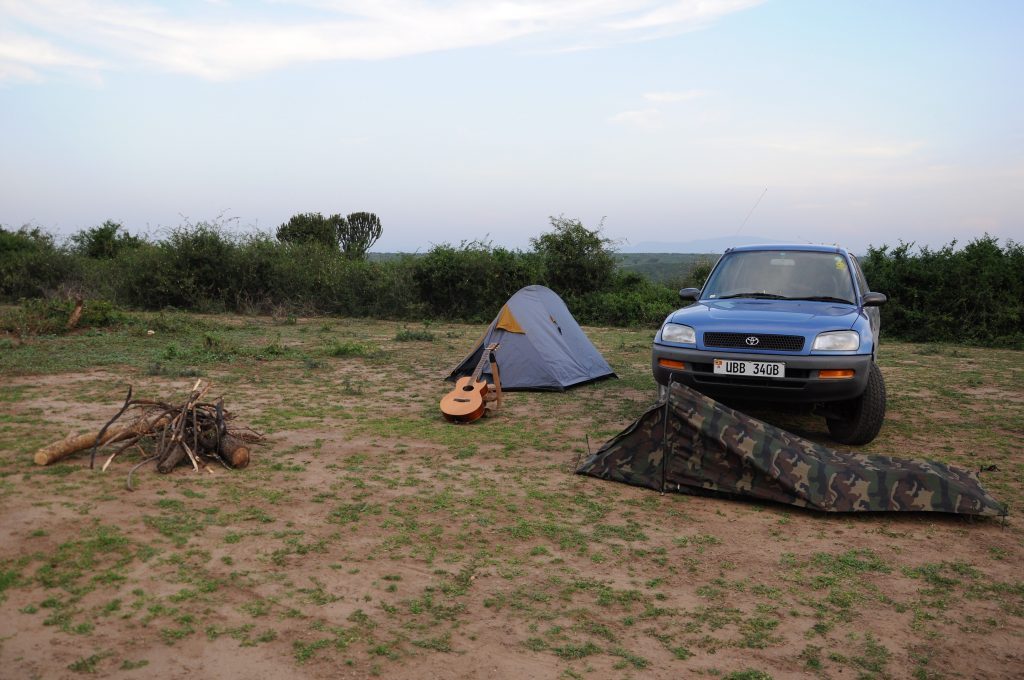 The camping in Mweya. The government deploys a soldier for security reasons because the camping has no fence and there are two lions and a leopard in the area, apart from hippos and perhaps some elephants. One soldier had been attacked by a leopard three weeks previously, so my guard was nervous when I returned from the nearby restaurant (ca. 300m) through the dark bushes at 8 pm. True, that was risky. We had a great night at the campfire together, with me playing guitar and especially with my Englished version of “Gulu” – yes, he’d been one of the night commuters for short while (see my post on Gulu).

After a disappointing game drive in the morning I headed on to the Ishasha sector. Several hours later I could pitch my tent in the beautiful At the River camp, and went on another game drive. I was so lucky, twenty minutes after I picked up my guide, we found four tree-climbing lions, which Ishasha is famous for. Allegedly there are only two places in the world where lions climb trees, one in Tanzania, and Ishasha. 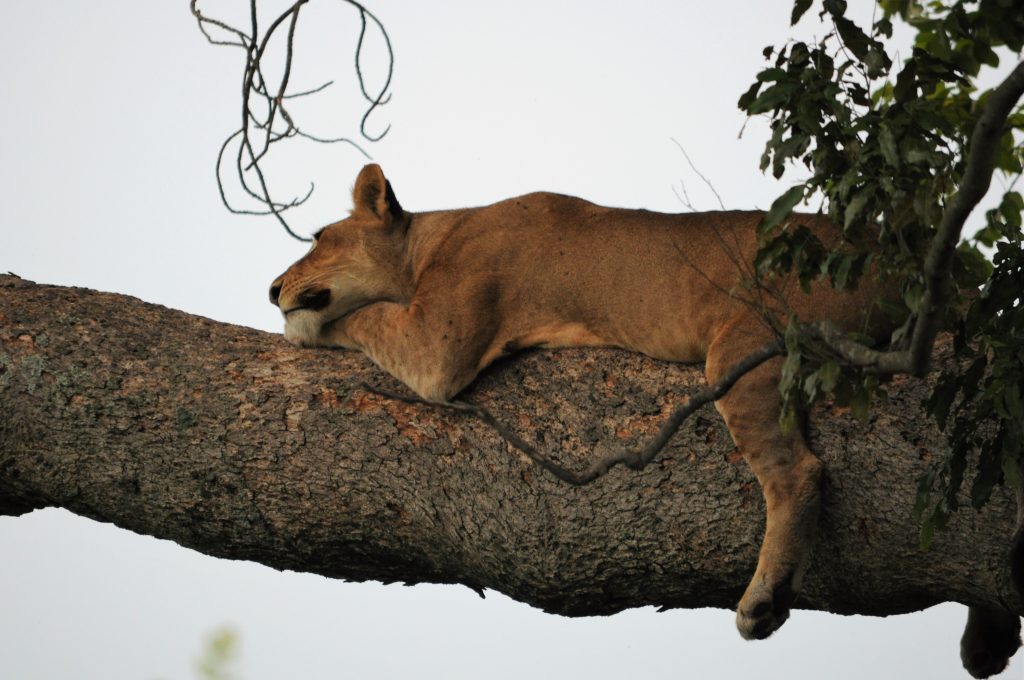 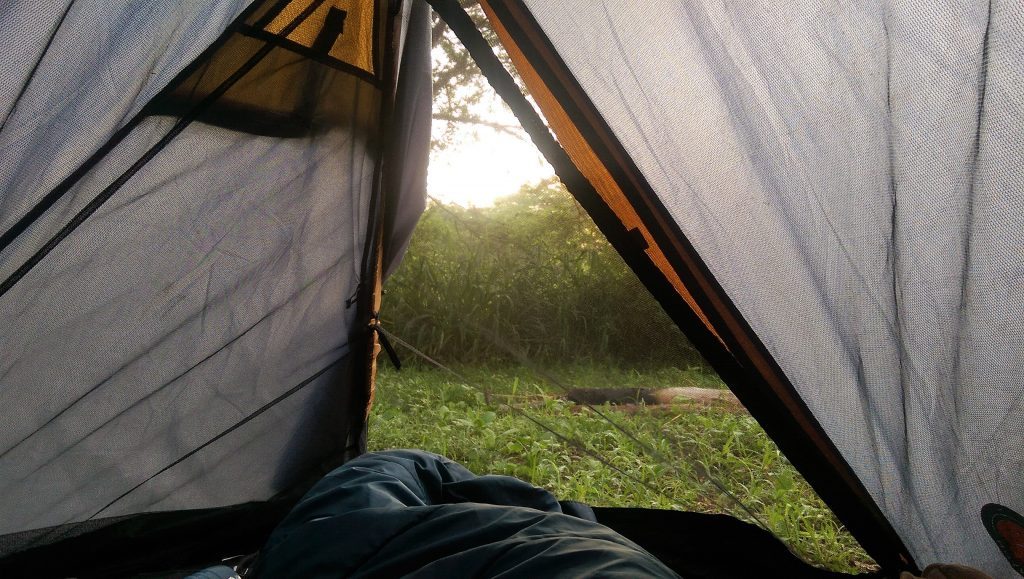 At the River Camp, Ishasha

Amazingly beautiful, the third-deepest lake in the world. I stay in two wonderful places, Edirisa eco-camp and Rock Resort, the latter at $ 145 a night my most luxurious, and truly luxurious accomodation. I don’t regret a single cent I spent on it. It was part of a package that included gorilla trekking (booked through Engagi – I can truly recommend my driver/guide Brian), and I even allowed myself a driver after the tiring drive from Ishasha to the lake (145 km dust track). 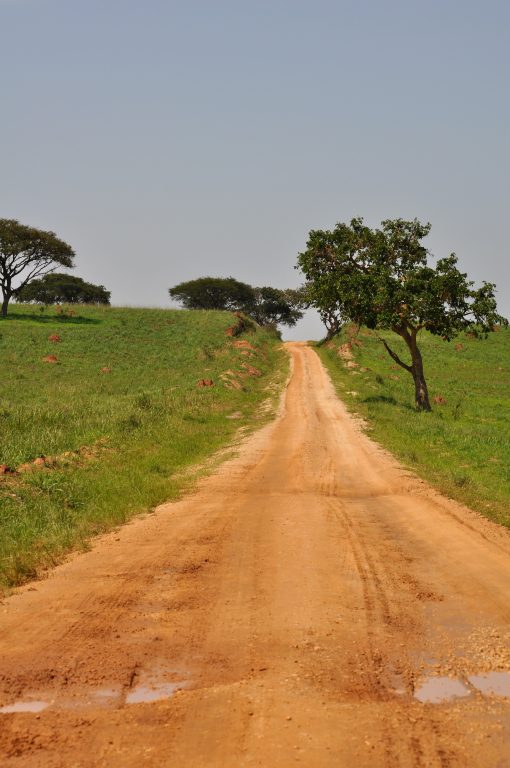 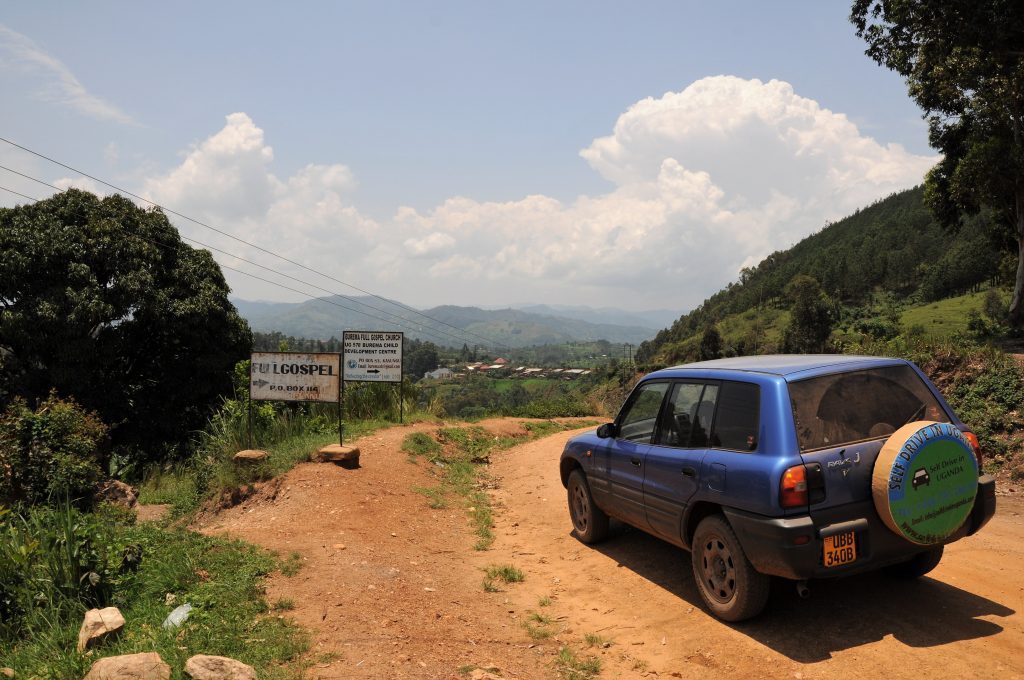 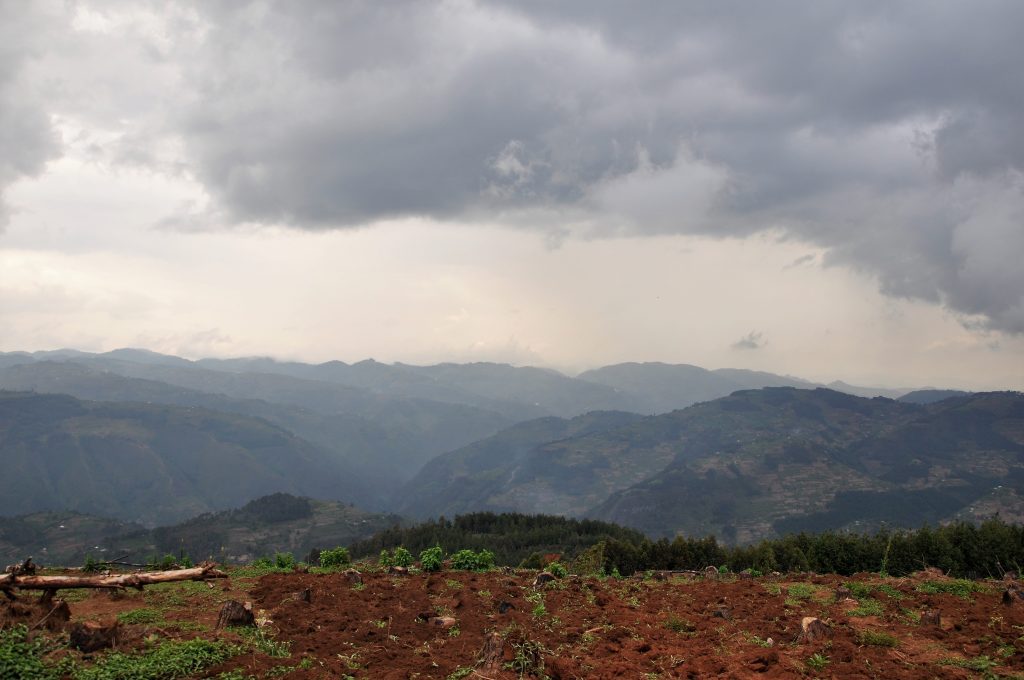 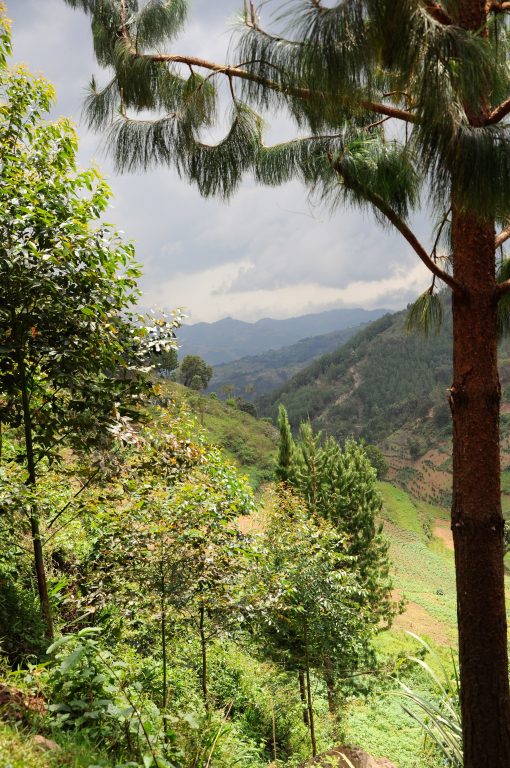 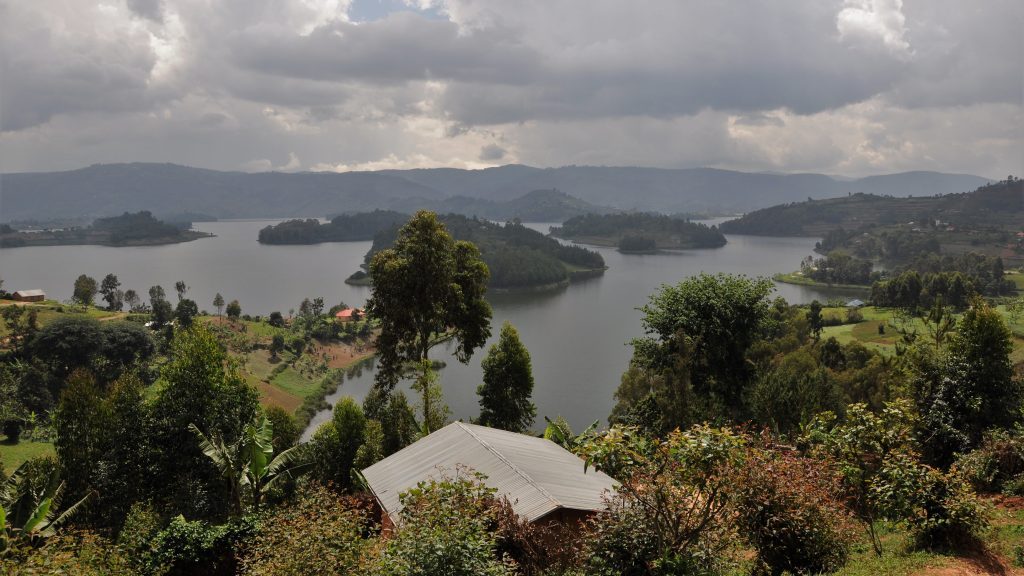 As beautiful as the lake is, there are sad stories connected to it. Just when I arrived, heavy rains caused a landslide on the other side of the lake (tree-cutting, erosions a contributing factors) killing 16 people.

One of the 29 islands is called Akampene, ‘punishment island’, because unmarried pregnant girls were left there to die. Read and hear the story of the last known survivor of this practice, Mauda Kyitaragabirwe, here. 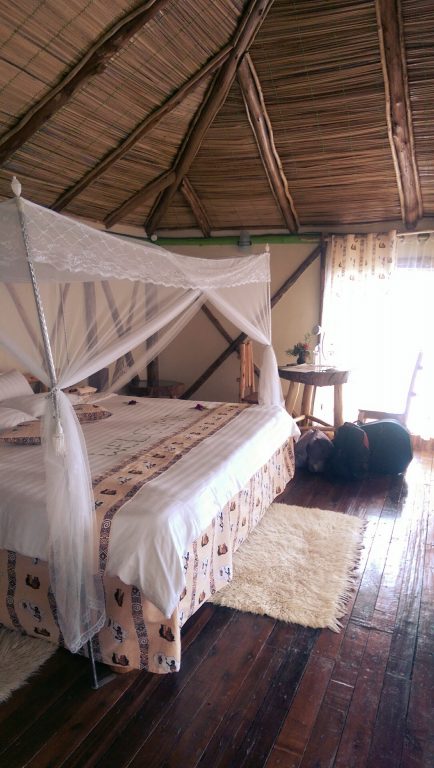 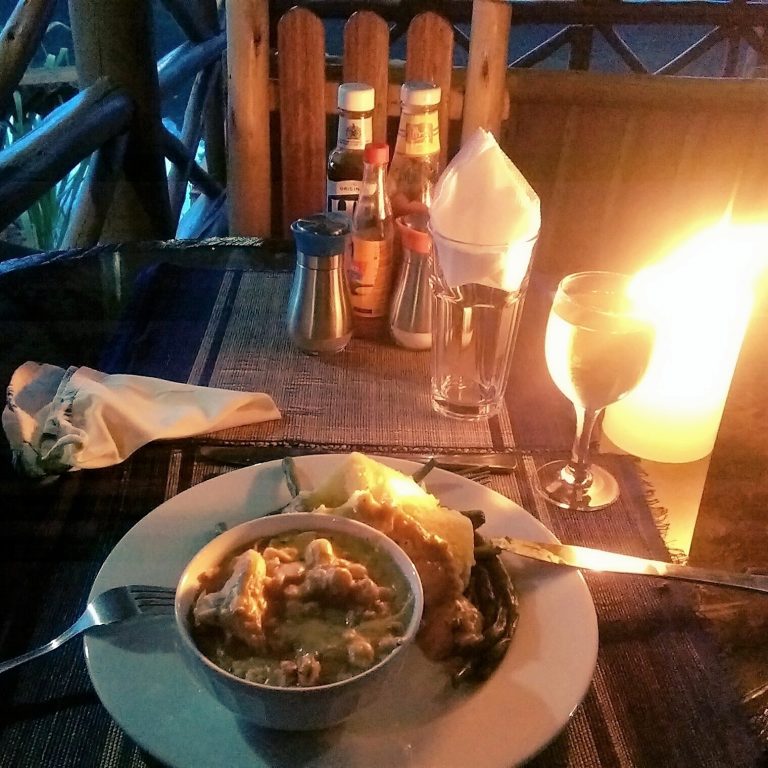 Waking up at 5 am, the drive to Bwindi Impenetrable Forest past valleys covered in fog was already magical. See more on Gorilla trekking in the forest here. 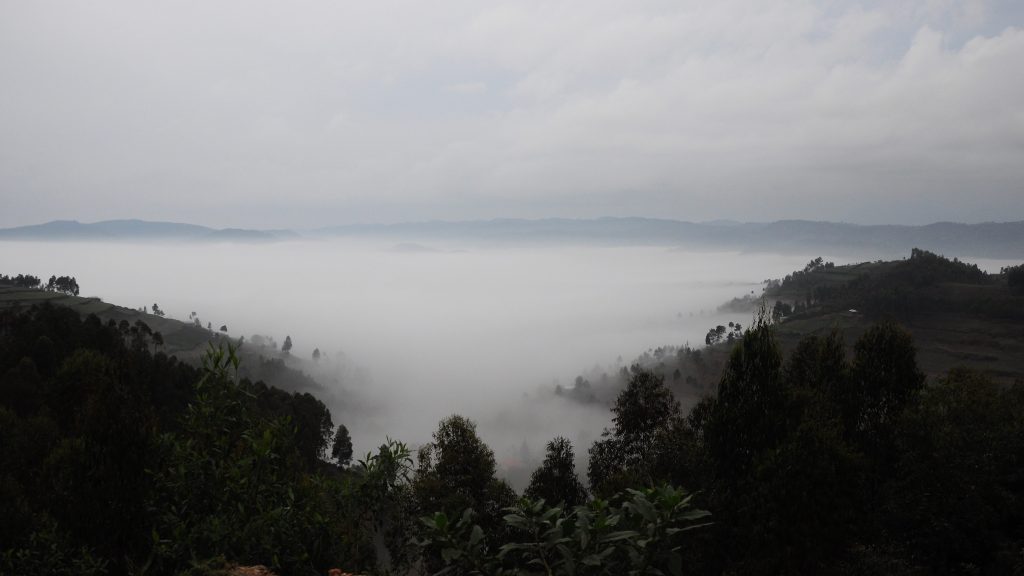